Where I learnt discipline? 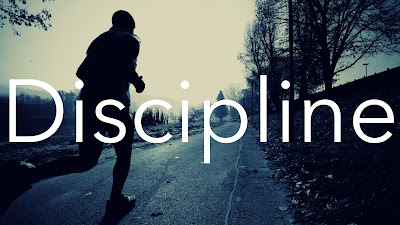 Islam teaches discipline in all facets of the human life; it’s the foremost important factor which is in line with prayer and worship. While performing due obligations, Islam instructs to do it carefully as any slight deviation would result in loss of that duty as time goes on. Those who aren’t mindful towards their responsibilities, won’t realize or learn it

Devil cannot cheat human being by disguising evil as good. Instead make him to delay or negligent towards the mistakes. Negligence in prayers and carelessness in committing sins are the two great weapons of devil

So that’s why following been said by our forefathers –

Adam (AS) expelled from Paradise due to one sin,

Devil made permanent resident of hell fire due to one sin,

So don’t be negligent whether it’s being just one and going ahead with it. Also don’t underestimate even a single good deed, as it might be weighing your balance scale on the judgement day

Islam always foresees any issues with a long term perspective –

To get rid of bigger sins, then it’s a must to distance ourselves from smaller ones

Those in power want to be freed from corruption, should avoid accepting even the permissible gifts

Those who like to safeguard from the clutches of usury, should be very careful in dealing with debts

Although prophet’ companions were very needy, their discipline to refrain from asking others, which Allah proudly says in the holy quran –

Because of their restraint, an ignorant would think them self-sufficient, but you will know them by their (characteristic) sign. They do not ask people persistently (or at all). And whatever you spend of good to those – indeed, Allah is aware of it (Quran 2:273)

Discipline while criticizing others:
When false propaganda spread out against Prophet Mohammad (PBUH)’ wife Aysha (RA), Prophet asked his family members view on this. Among them is Zaynab bint Jahsh who is another wife of Prophet Mohmmad – testified in favor of Aysha (RA), saying "I know nothing of Aisha except what is good." She was famed for her generosity, excellence in morality and helpfulness. She worked for her sustenance and would spend her earnings in the way of Allah and on the poor”

Discipline in earning livelihood:
Once an employer handed over a volume of materials to his employee and asked to sell those and return back. There were some un-noticed damaged stocks as well, but sold those without informing the defects to the buyer. Is this earned sum permitted or prohibited?

There are two different opinions whether to take this money or not!! One is let the amount equivalent to the material given as charity so that the profit alone retained, other is that, its sufficient if the profit alone spent on charity. Both are acceptable

In this situation, the employer after knowing this, felt guilty about it. Decided to give away in charity the material cost, profit earned and locker safe in which this earned money was kept

Discipline in bringing up a child:
Only a disciplined mother can fetch a disciplined kid to the society. All those who teach essential disciplines to kids, should be practicing those.

Other form of disciplines? Hope you could share your own!!

Posted by Unknown at 5:59 AM No comments:

Among the favours bestowed on us, Knowledge is an excellent thing. There are two types, knowledge through external sources and insight knowledge which is the deepest level of knowing the life’s meaning. To obtain this valuable insight, it’s mandatory to purify the heart & soul so that to truly grasp the underlying nature of knowledge and the essence of wisdom

As how a blind can’t see the world the same whose heart is blind cannot get any deep insight. It’s the truest understanding of your life and the bigger picture of how things intertwine

Those who got insights are the ones rightly guided. Further, they can easily judge and settle any issues without much difficulty

As how water gives life to barren land, inner insight provides light & hope to the heart

Those who obtain clear insight will see truth as truth, evil as evil and good as good. When encountered any situation, would able to handle with a long & clear perspective

Prophet’s advice to think with long term perspective –
Prophet (PBUH) sent Ali (RA) to Yemen as an Arbitrator. Ali (RA) said, O Prophet, you are sending me as a Judge but I’m a young person without good knowledge on how to deliver judgment. Then Prophet (PBUH) said, may Allah (SWT) make you very firm and just. Don’t deliver any orders without fully hearing from the defendant and respondent

O you who have believed, if you fear Allah, He will grant you a criterion (a guidance on how to differentiate good & bad) and will remove from you your misdeeds and forgive you. And Allah is the possessor of great bounty (Al Quran 8:29)